Coraline: a cavorting, spiraling animated masterwork that amazes, amuses, bewilders, disgusts and frightens as it weaves a moralistic tale that lurches back and forth between two worlds: the first, that of a typically awkward and somewhat mundane American family; and the second, a strange, fantastic world that vaguely parallels the real world of Coraline Jones, a scrappy, curious only child whose family has recently moved into the Pink Palace Apartments, a structure that is somehow ominous and flamboyant at the same time.

Not for the faint of heart, Coraline is an emotional smorgasbord, a weird amalgamation of teenage pluckiness, burlesque grotesqerie, family melodrama and genuinely creepy horror.  The reason I liked it so much is because it takes the viewer through all of this territory in a meandering, uncontrived plot sequence that begins innocently enough, but then slowly builds momentum until it reaches a frightening crescendo that leaves the young heroine in a winner-take-all competition with an evil nemesis who has lured her into another world by pretending to be a warmer, happier version of her own mother.  Worlds collide, lines are crossed, and lives hang in the balance in this robust visual creation in which anything seems possible, and nothing is predictable.

The moralistic theme of the story could best be summarized as “be careful what you wish for”, but, interestingly, this subtle theme betrays the fact that Coraline and the other characters never wish outright for entry into another world.  The other world seduces them.  In fact, they are stalked, preyed upon by forces of evil that draw them inside. In this sense, despite its animated beauty and young female protagonist, I would argue that Coraline is indeed a bloodless horror movie- not a fairy tale, fable or children’s story.  Thus, it qualifies as the only animated horror movie I have ever seen, and it is excellent. I highly recommend it.  But I would think twice about taking the little ones. 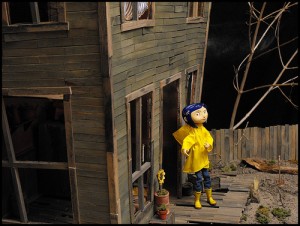