Anita Moorjani on What Is the Purpose of Life

What is the purpose of life? How does your purpose relate to nirvana, reincarnation and all time being simultaneous?

“BEFORE MY NDE, PROBABLY BECAUSE OF MY CULTURE, I used to think that the purpose of life was to attain nirvana—that is, to evolve beyond the reincarnation cycle of birth and death, striving never to come back into the physical. If I’d grown up completely immersed in Western culture, maybe I would have been trying to get to heaven. This is actually a fairly common goal, regardless of culture—to live in such a way as to secure a perfect afterlife.

But after my NDE, I feel differently. Even though I know I’ll go on living beyond this plane, and I don’t fear physical death anymore, I’ve lost my desire to be anywhere but the place I am now. Interestingly, I’ve become more grounded and focused on seeing the perfection of life in this moment, rather than focusing on the other realm.

This is primarily because the concept of reincarnation in its conventional form of a progression of lifetimes, running sequentially one after the other, wasn’t supported by my NDE. I realized that time doesn’t move in a linear fashion unless we’re using the filter of our physical bodies and minds. Once we’re no longer limited by our earthly senses, every moment exists simultaneously. I’ve come to think that the concept of reincarnation is really just an interpretation, a way for our intellect to make sense of all existence happening at once.

We think in terms of “time passing,” but in my NDE, it felt as though time just is, and we’re moving through it. This means that not only do all points of time exist simultaneously, but also that in the other realm, we can go faster, slower, or even backward and sideways.

In the physical plane, however, our sensory organs limit us. Our eyes take in what they see in this instant; our ears hear in the same way. The mind can only exist in one moment, and then it strings those moments together to form a linear progression. But when we spill out of our bodies, we cross all time and space with awareness—not sight, hearing, touch, taste, or smell. We’re pure consciousness.

I experienced this while in the NDE state. I was aware of my brother on a plane coming to see me and of conversations the doctors were having outside my room and down the hall. I understood many aspects of my future life, as they would be panning out, as well as what would happen if I didn’t come back and live. This showed me that time, space, and solid matter don’t always exist as we normally think of them. During my NDE, I felt that I could focus on any point in time that I needed to access.

Because of this, I believe that when someone has a glimpse of what have previously been interpreted as “past lives,” they’re actually accessing parallel or simultaneous existences, because all time exists at once. And because we’re all connected, it’s possible to achieve states of consciousness where glimpses of others’ reality seep through into our present moment, entering our consciousness as though they were memories.

My new perspective has made me wonder about our focus and purpose, if reincarnation and time itself don’t exist the way that so many of us were raised to believe. What if all our goals are the wrong way around? What if heaven or nirvana is actually here in physical expression, and not there in the afterlife?
…………………………
I came back with the understanding that heaven truly is a state and not a place, and I’ve found that bliss has followed me here to earth. I know this sounds really strange, but I even feel that our “true home” is also only a way of being and not a location. Right now, I feel that I’m home. I have no desire to be anywhere else. It makes no difference to me now whether I’m here or in the other realm. It’s all just different parts of the experience of our greater, expanded, infinite, magnificent self. Our real home is within each of us and follows us wherever we go.” ~ Anita Moorjani

To learn more about the simultaneous flow of our lives and the fulfillment of your purpose, please read my book “Beyond Past Lives”

Here is a picture of Anita and I at a recent I Can Do It conference by Hay House. 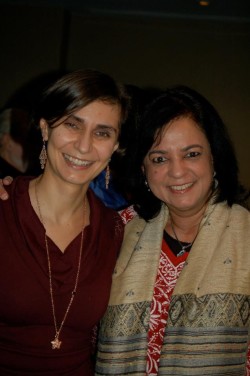