The question I get most often is, “What does “Rethnea” mean? What language is it in?”

Rethnea is my soul name.  Rethnea is the name of the bigger, wiser, more evolved soul that I am only a part of.

I really do not know what “Rethnea” means or what language it is in but I can tell you how the name came to me.

A few years ago I did a spiritual regression with Nancy Canning.  Spiritual regression is a session where the person is led back in time to a past life and into the Spirit world to meet with his or hers Spirit Guide and Council of Elders. I was in a very deep state of hypnosis during my session when the name “Rethnea” came to me.  I just knew that this was the name of my spirit and my knowing was so profound that nothing in the world could convince me that I made it up.  In fact, it sounded so strange and unusual to me that I told Nancy that I would like to spell something so she could write it down.  While in hypnosis, I explained to her that this was my spirit name and if she does not write it down I would never remember it.

After my session with Nancy Canning I researched everything I could on Rethnea and this is what I learned.

This story begins in 480 A.D. in county Waterford in Ireland when a girl is born to the noble and influential Déisí clan.

As a child this girl showed an unusual inclination to prayer and holiness. She had a remarkable spiritual presence, and everyone around her took note of her purity and grace. The girl grew up believing she had a calling from God and wanted to become a nun.

At the age of 16 she moved west to the county of Limerick, a mystical, beautiful country and established a community of nuns.  The girl became known as Saint Ita, the second most famous woman saint of Ireland.

St. Ita and her nuns spent their time praying, teaching the young and caring for the sick, the poor and the elderly. The convent came to be known as Killeedy, that is “Ita’s cell.”  The nuns had a school for little boys where the boys were taught “Faith in God with purity of heart; simplicity of life with religion; generosity with love”.

St. Ita and her nuns must have been inspiring teachers, for among their pupils were the future St. Columba, St. Fachtna of Ross, St. Pulcherius of Liath, St. Cummian of Clonfert, and St. Brendan of Clonfert.

And this is where Rethnea comes in our story.

Rethnea was one of the nuns who was a part of St. Ita’s community.  Rethnea was the teacher of St. Columba.

St. Columba is an outstanding figure in the early Catholic Church.  He was a great missionary saint — a statesman, a scholar, a poet, and the founder of numerous churches and monasteries.  St. Columba was born in 521 A.D., therefore, he must have been Rethnea’s student in the late 520s or early 530s.

This story is told to us by Adomnán, the ninth Abbot of Iona, an abbey established by St. Columba.   Adomnán who died in 704 later was canonized as a saint himself.  Adomnán wrote Vita Columbae (“Life of Columba”), the most important surviving work written in early medieval Scotland.

In 1874, Vita Columbae was translated and adapted from Latin, and was included in The Historians of Scotland, volume VI,  Life of Saint Columba.  In Latin the text which references Rethnea reads:

And that, my dear friends, are the only facts that I was able to gather on the name Rethnea.  If you know anything further or if you ever come across any other references please let me know.

Am I Rethnea, the teacher of St. Columba?  That is a questions that I am yet to discover the answer to. 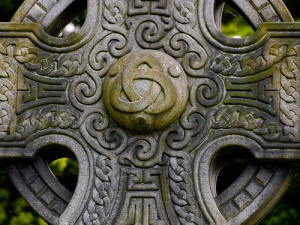