My aunt’s Volvo has a bumper sticker: “Kill Your Television”

But wait: its important for readers of this post to know that I deeply love pizza. And I’m no pizza snob. I enjoy a cheap, greasy slice with pepperoni after I’ve been drinking, or an artisanal thin-crust pie and a salad as a respectable meal. My ability to consume pizza is actually legendary in my family. But as I’ve gotten a little older, and maybe a little wiser, I’ve started noticing how pizza always makes me feel after I eat it. Not good. Not good at all. Pizza tastes great, but as good as it tastes, that’s how bad it makes me feel after eating it. Like an infinitely dense lump of grease sitting in my stomach.

Back to television. Now, we intentionally haven’t had a television for some time. But the proliferation of video on the internet has effectively undermined this decision, because there is enough mindless video content, complete with commercials and weird pop-up ads, to endlessly distract someone surfing aimlessly, and without willpower. This phenomenon has snowballed over a period of years, starting with youtube and culminating with myspace, facebook, espn360, hulu and netflix, until here we are at a point where I effectively have the ability to distract myself with as much visual content on the web as I would with an actual television. Maybe even more if I don’t mind watching low-quality video. 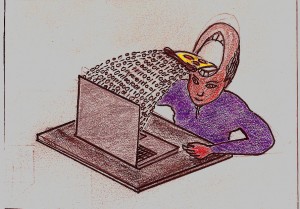 Recently I went on a web-video watching spree. Since I had lived for about two years without television, I had forgotten the deep emptiness that results from spending a few hours in that colorful, streaming visual abyss. It is addictive and confusing.

Just like pizza, I love television while I’m consuming it. But after a few hours of viewing, its like: “Hey honey, have you seen MY MIND around here anywhere?” Now, killing your television sounds pretty aggressive. But the crazy thing is that even if you have gotten to the point where you are ready to do it, it may not be sufficient in the modern world.  We cannot kill the internet too, because we also use it to pay bills, do important research, communicate with people. Oh, and also to write a blog.

Pizza tastes good, there is no doubt about it. Every once in a while, man, it just hits the spot. But that’s the rule: once in a while. So… why let my mind consume endless amounts of that which I only allow my body to consume in small doses? In the same way that I try to eat better, work out more and go to yoga, I also have to work hard to consume visual content that is valuable, enriching and non-debilitating.  Doesn’t my mind deserve the same treatment as my body?

Time to cut the mental pizza out of my digital diet.